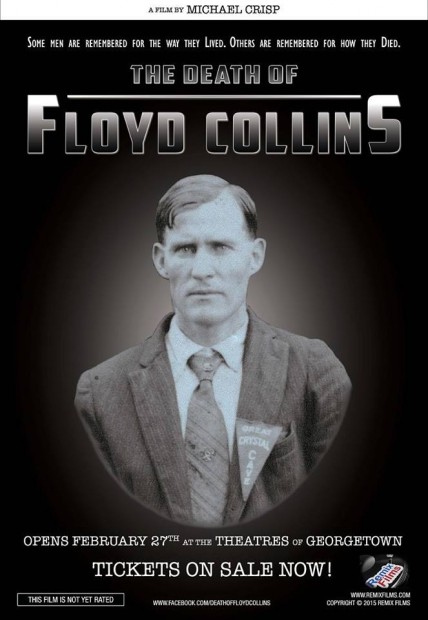 Poster for the Death of Floyd Collins documentary.

The world premiere of a new documentary about the death of Floyd Collins is slated to open in Paintsville, Kentucky on Friday, February 20th.

Directed by Michael Crisp, the documentary tells the tragic tale of caver Floyd Collins who made national headlines in 1925 when he became trapped while exploring Kentucky’s Sand Cave.

The two-week long rescue attempt and ensuing media circus catapulted him to a national celebrity. Unfortunately he was not able to enjoy his new-found status.

Not the first take on the tragedy—Floyd Collins has been the subject of books, song and even a musical—this film includes interviews, photographs, rare film footage of the rescue and re-enactments featuring local actors.

Expected to open to a packed house at the historic SIPP Theatre, the screening begins at 8:30pm. Tickets are $8.00, and can be purchased at the door or by contacting Barbie Mullins by email at [email protected], or by calling (606) 789-2600.

Following the world premiere in Paintsville, the film will be screening in Georgetown, Kentucky at the Theatres of Georgetown on Friday, February 27th and reportedly in Cave City, Kentucky on Saturday, April 11th.

For more information about the film and its upcoming premiere events, visit The Death of Floyd Collins Facebook Page.

Update: A winter storm has caused the premiere to be rescheduled to March 6th.