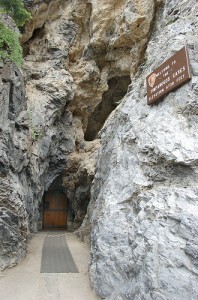 Some 150 tourists were stranded in the visitor center of Timpanogos Cave National Monument after torrential rains caused nearly a dozen mudslides in American Fork Canyon on Saturday.

A deluge of 20 millimeters (0.75 inches) of rain in just 15 minutes resulted in evacuations, power outages, street flooding and at least five mudslides blocking roads in the region.

Visitors at Timpanogos Cave took shelter in the visitor center where they waited until the Utah Department of Transportation could clear enough debris — one of the mudslides was reported to be 10 to 12 meters (35 to 40 feet) deep — to open a lane to traffic.

No injuries were reported, and the visitors were finally able to leave around 11:00 pm.

On Sunday, the park remained closed while rangers cleared large amounts of rock and debris from the trail leading to the cave.

A notice on the Monument’s website informs visitors that the cave is tentatively scheduled to open around noon on Monday.

Anyone planning to visit Timpanogos cave on Monday should call the visitors center at 801-756-5238 for updated information about closures.