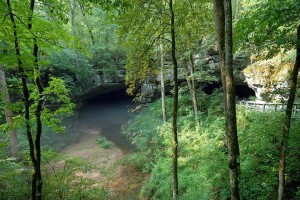 Last month, archaeologists completed their investigations into the erosion occurring at the mouth of Alabama’s Russell Cave National Monument.

Park employees, working with the Florida’s Southeast Archaeology Center, conducted several subsurface investigations to find the causes of erosion in a few section of the caves entrance.

Our work will provide the park with a strategy to help prevent further erosion and help preserve the site, John Cornelison, lead archaeologist

Now thought to be one of the most important archaeological sites in the Southeastern United States, the first relics were discovered at the site in 1953.

As a result of their research, archaeologists have determined that the important cave shelter was used by prehistoric Indians as a shelter for nearly 10,000 years.

Established as a National Monument by President John F. Kennedy in 1961, the 310-acre property was donated by the National Geographic Society.