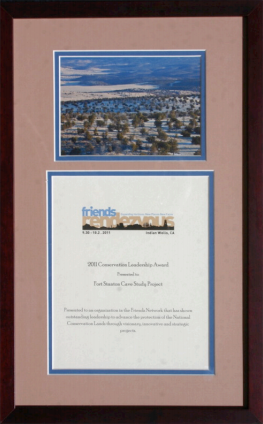 The Fort Stanton Cave Study Project, which works to enhance the understanding of New Mexico’s Fort Stanton-Snowy River Cave system, recently was the recipient of the first Conversation Leadership Award given by the Conservation Lands Foundation.

The award “recognizes outstanding leadership to advance the protection of the National Conservation Lands through visionary, innovative and strategic projects.”

Over the years, the many members and volunteers of the project have made some very important discoveries. One of the newest was the breakthrough into the Snowy River in 2001 after many years of digging. Snowy River is a large diameter passage with a bright white crystal calcite formation covering floor. It is currently about 8 kilometres (5 miles) long and no end has yet been found.