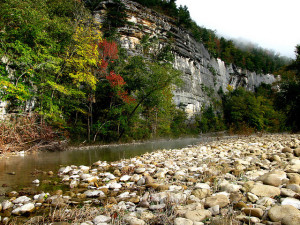 A caver spent 17 hours trapped in a pit earlier this month after his rope and ascending equipment failed due to an accumulation of sticky mud.

Late on June 22nd, National Park Rangers/technical rescue technicians from Arkansas’s Buffalo National River were called to assist a man trapped at the bottom of a 9 meter (30 foot) deep pit about 400 meters (1,300 feet) inside Kristin’s Cave, not far from the park boundary near Cozahome.

In an operation that was destined to last four-and-a-half hours, crews soon entered the cave to locate the trapped caver.

Once making contact with the man, an experienced caver with the Little Rock Grotto, crews determined that, although he was thirsty, hungry and cold, he was capable of ascending under his own power.

Before getting him out, one of the rescuers rappelled into the pit to provide the beleaguered caver with water, food, a thermal layer and clean ascending equipment. Then, belayed from above, the caver began ascending the pit on a new rope. He made it most of the way on his own, but rescuers used a raising system to assist him with the final 3 meters (10 feet).

The rescuer followed next, bringing along the fused wad of metal, nylon, and mud that had once been the cavers ascending system.