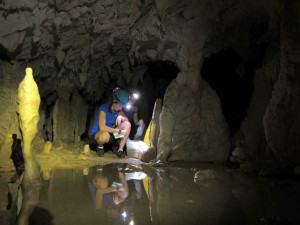 Researchers using stalagmites to study climate change in Borneo were surprised by some unexpected results.

Along with the Heinrich events, of which there was evidence in the Borneo stalagmites, Dansgaard-Oeschger excursions were one of two major types of abrupt climate change events that were prominently featured in a previously published stalagmite climate record from nearby China.

To my knowledge, this is the first record that so clearly shows sensitivity to one set of major abrupt climate change events and not another. These two types of abrupt change events appear to have different degrees of tropical Pacific involvement, and because the tropical Pacific speaks with such a loud voice when it does speak, we think this is extremely important for understanding the mechanisms underlying these events. Kim Cobb, Georgia Institute of Technology School of Earth and Atmospheric Sciences, Associate Professor

Collected during a 2012 field trip to the three caves in Gunung Mulu and Gunung Buda National Parks in northern Borneo, the four 0.5 meter (1.5 foot) long stalagmites were brought back to Georgia Tech where they were analysed to extract the important climate data held within.

By sawing the stalagmites in half, and using a tiny drill bit to extract calcium carbonate along the center at minute increments, the researchers collected more than 1,700 samples for oxygen isotope analysis.

Depending on the rate of growth, each tiny sample represented between 60 and 200 years of data.

Stalagmites are time capsules of climate signals from thousands of years in the past. We have instrumental records of climate only for the past 100 years or so, and if we want to look deeper into the past, we have to find records like these that locked in climate signals we can extract today. Stacy Carolin, Georgia Tech Ph.D. candidate

When merged, the data from the stalagmites have been able to give scientists a record of precipitation trends in the western Pacific over the past 100,000 years.

This record, which spans the entire last glacial period, adds significantly to the understanding of how various climate forcings are felt by the western tropical Pacific. Stacy Carolin, Georgia Tech Ph.D. candidate