Besides facilitating easy access to visitors of the soon to open Indiana Caverns, the creation of a new entrance into Indiana’s Binkley Cave has for the first time allowed a paleontologist to visit Big Bone Mountain.

Initially discovered in October 2010, Big Bone Mountain, as it was soon dubbed, was found when members of the Indiana Speleological Survey climbed up a nearly vertical slot into a room littered with bones.

As it was a strenuous 10-12 hour expedition to reach the room, the cavers couldn’t get a palentologist to the site and for the time being had to suffice with sending photos to Ron Richards, Chief Curator of Science and Technology at the Indiana State Museum in Indianapolis. From his initial impression of the photos they sent, he thought the bones may be from either Bison or Musk Ox. 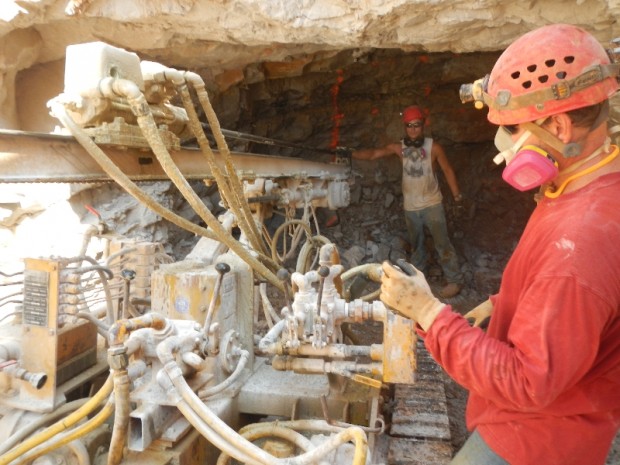 Cavers Rand Heazlitt and Ryan Cox drilling in the tunnel, which will soon open into Big Bone Mountain room of Indiana Caverns. Photo by Gary Roberson

With the drilling of a new entrance in early June 2012, the developers of Indiana Caverns created an easy to access route to the area and Ron Richards was finally able to come down to do a paleontological survey of the site on July 7th, 2012.

Richards had been only been in the cave some 20 minutes when he realized that Big Bone Mountain was a truly significant site for Pleistocene animal bones. 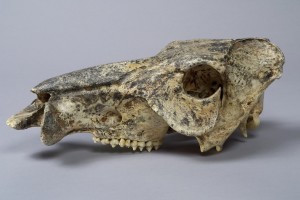 A Pleistocene flat-headed peccary skull from the permanent collection of The Children’s Museum of Indianapolis. Photo by Wendy Kaveney

During that first visit he recorded the remains of the “extinct Flat-headed peccary (Platygonus compressus), an ancient pig-like animal. Skulls are exposed at the surface, and the deposit in the room may contain 20- 40 individuals at minimum.” Besides the peccary bones, the remains of black bear, fisher, owl, other birds, a bison and even two snakes were visible on the surface.

Numerous bear beds were also found along the river passage, some with peccary bones inside.

Lacking any evidence of modern visitation, it is suspected that the natural entrance to Big Bone Mountain, once apparently used for shelter by herds of peccary, closed up sometime near the end of the last ice age, some 12,000 to 14,000 years ago.

With enough bones in at the site to keep several paleontologists excavating for years. It appears there remains much more to discover below the surface.

Thankfully, the developers of Indiana Caverns are making an effort to ensure the site is protected and available for future research.