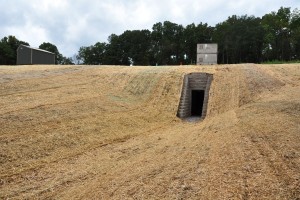 A view of the human entrance following construction of the artificial bat cave. Photo via The Nature Conservancy

The award, given to Oldcastle Precast of Lebanon, Tennessee for their work on the cave, recognizes projects that promote the innovative and cost-saving advantages of precast concrete.

Completed last fall, the experimental man-made cave was built for the Tennessee chapter of The Nature Conservancy as an experiment to try to provide a safe refuge for bats which are struggling with white-nose syndrome.

The 24 meter (78 foot) long artificial cave, constructed out of prefabricated concrete, features textured walls and ceilings for the bats to cling to as well as a special bat entrance and a secure human entrance.

The idea behind the project is that scientists can disinfect the cave every spring after the bats leave to try and keep the spore count of the Geomyces destructans fungus, the cause of WNS, below lethal levels.

Although reports indicate that no bats took up residence this winter, it is suspected that cave may have been completed too late in the season for bats to find it. Hope remains that some bats will hibernate in the new cave next winter.