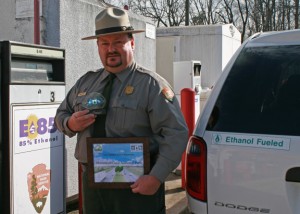 Mammoth Cave National Park has become the recipient of an award for being a pioneer in using alternative fuels in its vehicle fleet.

The Pioneer Fleets of the Green Fleets of the Bluegrass Program award was given out this past December to twelve organizations by the Kentucky Clean Fuels Coalition.

Mammoth Cave is the first national park in the country to use 100 percent alternative fuels and advanced technologies in their fleet.

Biodiesel is used with all heavy duty equipment, including the Green River ferry boats. Low speed electric vehicles are utilized by campground staff, and all cave tour buses use propane. More than 90 percent of the vehicles used by Mammoth Cave run on either E10 or E85.