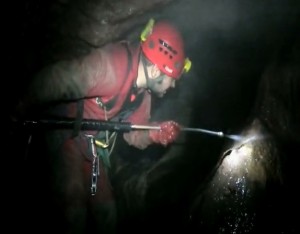 A new video showing the intense effort that went into cleaning Belgium’s Saint-Anne Cave last fall has been recently put online by the European Speleological Federation.

In August 2012, members of the Belgian Union of Speleology‘s Protection of Karst and Access to Caves Commission participated in a three-day long operation to the clean significant deposits of soot.

Although the use of carbide has now been effectively abandoned in Belgium, 50 years of visitors its use, combined with torches being lit in the distant past, had coated the cave with black grime.

By stringing together hundreds of meters of extension cords, the cleaners used pumps and pressure washers that drew water from the underground river to clean the cave walls. Meanwhile, the fragile areas were cleaned with hand sprayers.