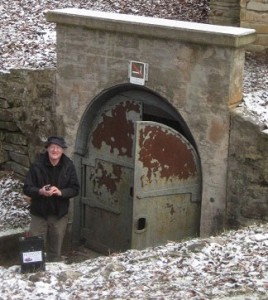 Bob Bruninga at the Carmichael Entrance with the walkie talkie in one hand and in the foreground, one of the black-box relays. Photo by Rick Olson

A radio test conducted during the recent NSS Volunteer weekend at Mammoth Cave National Park has extended the range of UHF communications to nearly a mile (1.6 kilometers) underground.

On Saturday March 2nd, a string of 14 UHF text-messaging and position reporting APRS HAM radios used each other as automatic relays to provide continuous communications to the surface from anywhere along the mile. Cavers carried maps with a lat/long grid and could manually enter their position and send simple text messages. Establishing the network was as easy as walking to the end of each radio’s range, and then backing up a few dozen feet to regain contact and placing a walkie-talkie on a rock… then continuing.

Although the typical 400 foot (120 meter) or so UHF radio range has not been impressive to cavers in the past, this new capability to automatically link up to 14 such hops into a continuous network could be useful in many cave projects. Although these ham radios are expensive, they operate in the same UHF spectrum as the inexpensive $20 FRS radios available everywhere. This makes it easy for any cavers to test the viability of such a system before a major investment of the $500 radios or the need for a Ham license. 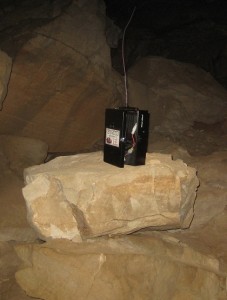 One of the radio links during the test. Photo via Bob Bruninga

To conduct a test, you only really need two FRS radios. Start at the entrance with one radio and the other carried to max range for the first passage. Then keep a radio at that location and leapfrog a radio to the end of the second link. And so on up to 14 hops. Once these places are known, then future expeditions could use the APRS radios to provide continuous texting and position reporting communications along the entire path.

For very deep penetrating expeditions, communications back to the entrance might not be needed and other classical HF vertical links can make contact with in-cave basecamps and then from there the UHF system can go out another 14 hops in any direction.

This experiment is just a first step, next we will have to discover the viability and length of these links in the harder spots and smaller/wetter passages than the subways of Mammoth Cave.

A scale map shows the approximate location of each of the UHF digipeaters and the lengths of each link. Map via Bob Bruninga

Any cavers interested in conducting their own experiments or sharing their opinions on whether such a system would be useful and in what circumstances are encouraged to visit the Cave-link Radio page or email me, Bob Bruninga, at [email protected].

About Bob Bruninga
Bob came up with the APRS concept in the mid 1990's when GPS became economical to combine with Ham radio. It has since grown to include tens of thousands of Ham Radio users and applications - see your area's portion of the global network on APRS.fi. An early caver as a kid in North Alabama, Bob visited few caves during his 20 year Naval career until a recent tourist trip to Mammoth Cave inspired underground APRS tests.
Sorry, comments have been closed.