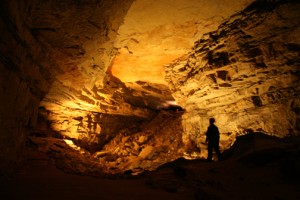 Kentucky’s Mammoth Cave, the longest cave in the world, has now been surveyed to an amazing 400 miles (643 kilometers).

The expansion of the Mammoth Cave system in the last few years has been a matter of incremental additions to many parts of the cave rather than a single major discovery that pushed the cave past 400 miles. In recent years we have resurveyed sections of the cave so that we can produce more detailed maps that meet modern mapping standards, as well as exploring and mapping previously unexplored passages. Charles Fox, Cave Research Foundation President

The milestone was reached thanks to a cooperative effort between the National Park Service, the Central Kentucky Karst Coalition, and the Cave Research Foundation who has a general agreement with the Park to explore, survey, and map the cave. Mapping the cave is important as it allows the Park to better protect its geological and biological underground resources.

The Cave Research Foundation has been a key partner with Mammoth Cave since 1956, sharing our commitment to cave and karst stewardship. Their volunteers make things happen that otherwise would not be possible. Sarah Craighead, Mammoth Cave National Park Superintendent