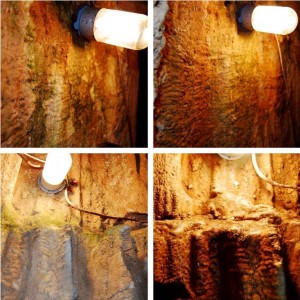 Before & After Shots of Algae Cleaning in Kentucky’s Outlaw Cave. Photo by Matt McClintock

The most recent undertaking, the Conservation Weekend Project of Outlaw and Onyx Caves in cooperation with the American Cave Conservation Association, saw the removal of algae from around lights , the covering of wires, bulb replacements, speleothem cleaning, and the removal of 180 kilograms (400 pounds) of steel I-beams and other debris inside Outlaw Cave.

Meanwhile at nearby Onyx Cave the team removed algae and 450 kilograms (1000 pounds) of wood, the remains of the original stair case. 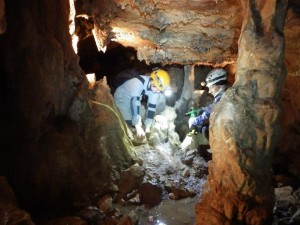 Already, according to the NSS Volunteer Value Worksheets, they’ve amassed a total volunteer project value of over $16,000.

Building on this success, Twin Lakes CTF has lined up a number of projects for 2013 including sink hole clean ups, continued cooperation with the ACCA, and a year-long project with a local Boy Scout Troop focused around caving and cave conservation. In addition members will be attending the Mammoth Cave Restoration Camp this March.

For more information, including how to participate, visit the Twin Lakes Cave Conservation and Survey Task Force Facebook page, or contact them directly via email at [email protected] or by phone at 270-287-1001.