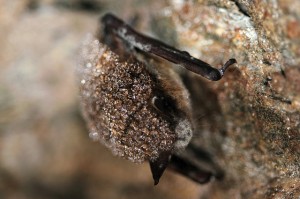 A paper detailing the research that led to the development of the U.S. Fish & Wildlife Service White-nose Syndrome Decontamination Protocols has been released.

Set to be published in upcoming April issue of the Journal of Cave and Karst Studies, the paper compares and evaluates the effectiveness of different decontamination protocols.

As we know from the USFWS white-nose syndrome decontamination protocols which were released in April 2012, this research discovered that the use of disinfectants such as Formula 409 and Lysol or immersion in water above 50º Celsius (122º Fahrenheit) for at least 20 minutes are both effective ways to remove Geomyces destructans fungal spores.

We now find out that these measures, when appropriately followed, have an effectiveness of greater than 99.995%, leaving very little chance of spreading this dangerous pathogen.

Furthermore, the paper goes on to state that “the spread of WNS along bat migration routes and the lack of numerous geographic epicenters may also suggest that human vectored transport of G. destructans may be rare.”

Despite this hopeful suggestion, it is still important for cavers to continue to decontaminate in order to show landowners and management agencies their commitment to protecting caves and all the critters that live inside them.

For more information, the full paper is available online on the Journal of Cave and Karst Studies website.

Evaluation of Strategies for the Decontamination of Equipment for Geomyces Destructans, The Causative Agent Of White-nose Syndrome (WNS) [Journal of Cave and Karst Studies via @cavescience on Twitter]