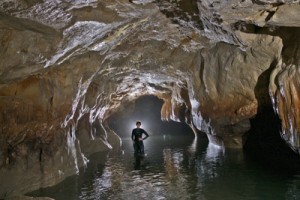 A Passage in Matainaka, the World’s Longest Sea Cave. Photo via The Virtual Cave

Recent surveys of New Zealand’s Matainaka Cave have confirmed it, as of October 2012, as the world’s longest sea cave.

Based on survey work by Nicholas Barth, Matainaka Cave, located on the Otago coast of New Zealand’s South Island, has been found to be an amazing 1.54 kilometers (5,051 feet) long.

This astonishing length for a sea cave — more than three times longer than the previous record holder, Oregon’s 401 meter (1,315 foot) long Sea Lion Cave — has resulted from numerous fractures in the sandstone that have allowed the formation of many intersecting passages and a dozen entrances.

Interestingly, the cave forming faster than its collapsing, which means than its only going to get longer.

Not far away from Matainaka Cave, another sea cave — known as Purple Cathedral for the red algae exposed on the walls during low tide — has also been recently surveyed and found to be 404 meters (1,325 feet) long, making it second longest sea cave in the world.