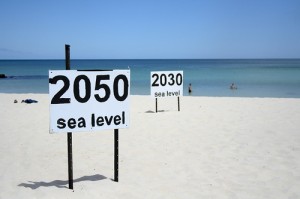 Predictions of Where Sea Levels Will Be in 2030 and 2050 at Western Australia’s Cottesloe Beach. Photo by go_greener_oz/flickr

Climatologists working in a cave near the Red Sea are using stalactites to improve the accuracy of their predictions of sea level rise.

Researchers at the UK’s University of Southampton have been looking at historic sea levels in the Red Sea to see how we can expect levels to change in the future.

The data, going back 150,000 years, has now been further refined by cross referencing the results of analyzing sediment cores to those in stalactites in a nearby Israeli cave.

By measuring chemical makeup of stalactites and performing tests to find the age of the formations, researchers were able to discover when sea level changes occurred to an accuracy of about 200 years. This information, matched with key data from sediment cores whose dates are much harder to estimate, allowed researchers to obtain some of the most accurate historical sea level data ever.

Suspected to be one of the most dangerous side effects of climate change, the new data now expects the sea level to ruse about one meter (3 feet) per century. Although far slower than the some of the alarming earlier predictions of several meters (~10 feet) per century, the new predictions indicate that the rise will continue for centuries.

We’ve put the freight train in motion and it’s going to be very difficult to slow it down, Eelco Rohling, Researcher at the University of Southampton

The research has been published in the recent issue of the journal Nature.