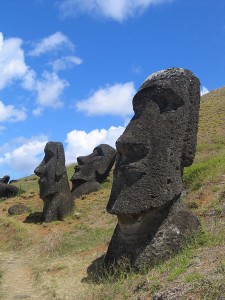 A webinar promising to uncover the mysteries of Easter Island’s caves has been scheduled for January 10th, 2013.

This presentation, part of the NSS webinar series, will discuss our current findings, interpretations, and future directions for cave research and conservation on Easter Island.

Prior to the arrival of the first Polynesian settlers, there is evidence that Easter Island’s landscape was much different. Researchers believe that first settlers found a lush subtropical forest instead of the barren grassland we know today.

Recent efforts to study to the biology and archaeology of the island’s caves have uncovered that less than four percent of the over 400 known arthropod species found in the caves are native. Despite this, the discovery of a number of new arthropod species allow researchers to remain hopeful that some of the organisms may be descendants of ancient native ecosystems.

Space is limited, so reserve your spot now.