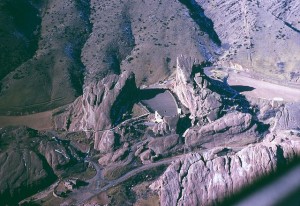 Rescuers have spent the last few days searching for a body reportedly discovered in a “cave” near Denver, Colorado.

A man exploring an area near the Red Rocks Amphitheater just west of Denver, allegedly found the upper half of a bloated body late on Wednesday afternoon.

Despite immediately contacting authorities and attempting to lead them to the site, it quickly became too dark to search the steep rocky terrain.

A renewed search on Thursday was foiled when the man who reported the body failed to show up and direct the searchers due to a conflict with his Thanksgiving plans.

Without guidance, firefighters and sheriff’s deputies attempted to find the body on their own but had trouble as they who were not prepared to search in the narrow crevices.

Further troubles occurred on Friday when the man was again unable to lead rescuers to the location due to a commitment to work a 12-hour shift.

Searching unaided once again, searchers, including volunteers from the Alpine Rescue Team, failed to find any sign of a body.

Although the lack of follow through by the man who reported the discovery is puzzling and there have been no reports of missing cavers or climbers in the area, authorities are intrigued as the initial report appeared credible and the description of the condition of the body seemed authentic.

The search is expected to resume next week, hopefully with the help of the man who reported the discovery.