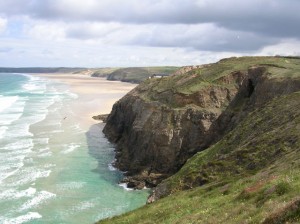 A man found unresponsive in a cave on the north coast of Cornwall initiated a major rescue involving police, the coastguard and a helicopter.

A passer-by discovered the man on Perranporth beach at around 8:40am on Thursday morning. Unable to rouse him, an ambulance was called to the scene.

In case there were further casualties Falmouth coastguard called out the St. Agnes cliff rescue team and a Royal Navy helicopter.

During all the commotion the subject of the incident woke up from his slumber and asked what was happening and if he could help.

It was then explained that he, a vacationer believed to be staying at the nearby Perran Sands Holiday Park, had been drinking the previous evening and was sleeping it off in the cave.

Lucky for him he chose an area to sleep that was above high tide that day.