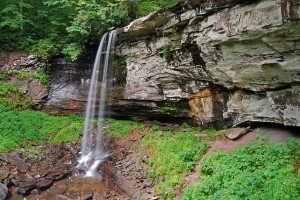 A report studying the social and economic values of caves on National Forest Lands has just been released.

Undertaken by Neal Christensen, a social scientist from Christensen Research, and Cynthia Sandeno, the U.S. Forest Service National Cave and Karst Coordinator, the report focuses specifically on the caves of West Virginia’s Monongahela National Forest, which due to the spread of white-nose syndrome, have been closed since 2009.

To gain an understanding of the importance of caves in the Monongahela National Forest to the caving community, the researchers interviewed cavers and analysed their responses.

The results of the analysis indicate that the cave closures have indeed had social impacts in the caving community. Cavers in general feel a sense of loss from the closures; a loss of opportunities for natural recreation, stewardship, and science, as well as a loss of a sense of belonging.

The interviews also suggested a genuine passion and concern for the health of the cave environment among cavers, specifically that caves and bats may be more vulnerable to human caused negative impacts, such as vandalism, because the caves are closed to the responsible caving community.

On the other side of the equation, economic impacts from the cave closures are believed to be small, though not insignificant and concentrated to a few businesses such as local owned lodges and restaurants.

Going forward the report recommends that managers making decisions about the protection of these resources should be aware of the social and economic values at stake and should acknowledge and consider the importance of these public places to the caving community.

It further suggests that in order to provide the best management for the caves and bats, cavers should be engaged in the in planning and implementation of stewardship efforts.