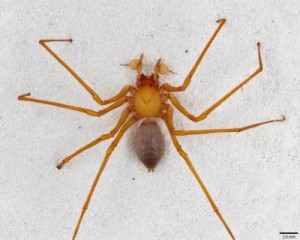 Oregon cavers have discovered a new family of spiders in the Siskiyou Mountains of Southern Oregon.

The first new spider family found in North America since the 1870’s, Trogloraptor marchingtoni, is named for its cave home and spectacular, elongate claws.

Reddish brown and about the size of a half-dollar, the spider was initially discovered in 2010 during an expedition by the Western Cave Conservancy to inventory cave critters in a private cave outside Grant’s Pass.

Specimens sent to the California Academy of Sciences prompted a visit by scientists to collect live specimens for further research.

It took us a long time to figure out what it wasn’t. Even longer to figure out what it is. We used anatomy. We used DNA to understand its evolutionary place. Then we consulted other experts all over the world about what this was. They all concurred with our opinion that this was something completely new to science. Charles Griswold, Curator of Arachnids at California Academy of Sciences in San Francisco

Even more interesting is that since the discovery, colleagues from San Diego State University found another new species belonging to the same family in the old-growth redwood forests of Northern California.

A study of the new family and its evolutionary and conservation significance was published recently in the journal Zookeys.