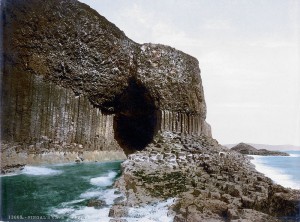 A German tourist died during a visit to Scotland’s Fingal’s Cave on Friday.

The man, aged between of 30 and 40, was taking photographs of the cave when he the slipped and fell some 15 meters (50 feet).

The tour boat, Ullin of Staffa, called for help and a Tobermory Lifeboat and Royal Navy rescue helicopter attended the scene to assist man who suffered multiple fractures. Unfortunately before they were able to transport him to hospital in Oban, he had already succumbed to his injuries.

Part of the National Trust for Scotland, Fingal’s Cave is a sea cave on the uninhabited island of Staffa that was formed entirely from hexagonally jointed basalt columns, similar to the structure of the Giant’s Causeway in Northern Ireland.