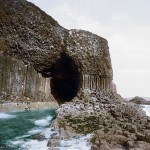 A group of 5 tourists were visiting Fingal’s Cave on the uninhabited island of Straffa off the west coast of Scotland, when the small dingy they were in overturned.

The group, along with two crew members were able to swim to the foot of the cliff, where they stayed until they were winched to safety 40 minutes later by a helicopter from HMS Gannet. The tourists were taken to a hospital in Oban, while the crew were left back on the main boat.

The island of Staffa is formed entirely from hexagonally jointed basalt columns, similar to the structure of the Giant’s Causeway in Northern Ireland. It is within the columns where Fingal’s Cave is a sea cave has formed.

In Gaelic the cave’s name, Uamh-Binn, means “cave of melody”, so called because of the sound the waves make when echoing in the arched dome within the cave. The noise inspired composer Felix Mendelssohn to write Fingal’s Cave overture in 1829, which has since popularized the cave as a tourist destination.