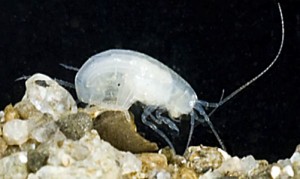 Three new species have been discovered by cave divers on an expedition inside New Zealand’s Nelson cave.

A team of Australian cave divers mapping the cave recently spent 13 days at the site, one of the world’s deepest caves, making some 74 dives into frigid water.

During the dives the unnamed critters, a transparent crustacean, a gastropod snail and an oligochaete worm were found at depths between two and 40 metres (six and 130 feet).

They were collected by using a stygoslurper, a device similar to a turkey baster, or trapped in small plastic jars baited with shrimp.

It’s important to do an inventory of life in New Zealand, and in this case, it’s a pretty special type of environment and we don’t have many limestone karst systems that are readily explored. Graham Fenwick, National Institute for Water and Atmospheric Research Scientist

The New Zealand National Institute for Water and Atmospheric Research is now working on names for the new species. The process could to take up to 18 months.