On May 7th Underground of Enchantment will be opening at the Carlsbad Museum and Art Center. The 3D photo exhibit of Lechuguilla Cave in southeastern New Mexico will feature the works of David De Roest, Michel Renda, Daniel Chailloux, Peter & Ann Bosted talented cavers/photographers who hail from Belgium, France & the United States.

Lechuguilla Cave is the deepest limestone cave (1597.4 ft/486.9m) in the USA & fifth longest cave in the world (128miles/206km). The cave holds a spectacular but fragile ecosystem which was cut off from the surface until 1986. To protect this system, entry into Lechuguilla is restricted to exploration & science. Underground of Enchantment 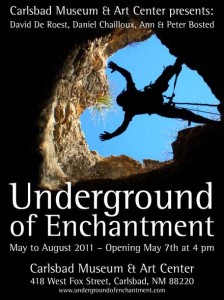 The exhibit runs until August 2011 at the Carlsbad Museum and Art Center, afterward it heads to the The Western Heritage Museum in New Mexico from September to October. From to August 2012, it will be shown at Carlsbad Caverns National Park itself.

For more information head on over to the official Underground of Enchantment website.