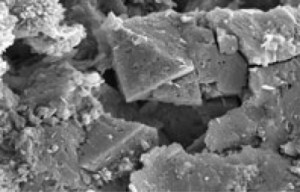 Photo via the Cantabria Government

A new mineral has recently been discovered in a Spanish cave.

Located in the northern region of Cantabria, the cave, known as El Soplao, contains the only known deposit of a new mineral dubbed zaccagnaita-3R.

The discovery was made by a team of researchers from the Geological Survey of Spain and Madrid University working in the cave through an agreement with the Spanish Department of Innovation, Industry, Tourism and Trade.

Zaccagnaita is an extremely rare mineral first discovered as microscopic deposits in Italy in 2001. Zaccagnaita-3R is even more unique in that it is the first reported case of a zaccagnaita formed in a cave.

The findings are published in the April 2012 edition of the journal American Mineralogist.

Unheard of mineral discovered in a cave in Spain [mining.com]