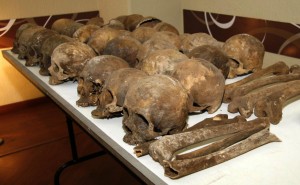 The remains of as many as 167 people have been found in a cave in southern Mexico.

Discovered stacked atop each other, the bones were found last week on the Nuevo Ojo de Agua ranch by local farmers.

As the area is often travelled by Central American migrants heading north, the remains were initially suspected to be a mass grave, similar to what has been found in the northern part of Mexico in recent years.

Further investigations by the country’s main anthropology agency have determined that the remains seem to be part of a 1,300-year-old pre-Hispanic cemetery.

Clay artwork that could have originated from the same era was also discovered in the cave.