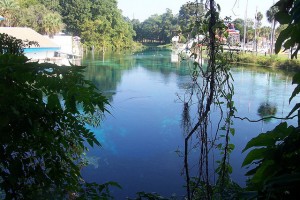 A cave diver died on Saturday afternoon during a dive at the main spring in Florida’s Weeki Wachee State Park.

Shortly after 4:30 pm, five divers entered the water and descended into an open cavern area about 50 meters (175 feet) down. During the descent they passed through several tight rock formations about 30 meters (100 feet) down.

According to the Hernando County Sheriff’s Office, the diver, 29-year-old Marson Ashly Kay of Gainesville, became disoriented and took a different path to the surface during an ascent. He then became wedged in an area where the opening was too small for him to swim through.

The other divers in the water soon found him and tried to free him, but were unsuccessful. They then continued to the surface and alerted the rescue team which immediately went to his aid, reaching him only a couple minutes later.

Despite the quick response, the rescuers were too late. When they arrived, Kay was lifeless, with his mask on his forehead and his regulator out of his mouth.

The rescue divers freed his body and surfaced shortly after 4:45 p.m.

Kay was a member of Karst Underwater Research, a nonprofit organization that maps underwater springs. Through their work they have discovered that Weeki Wachee Spring is the deepest spring in the U.S.