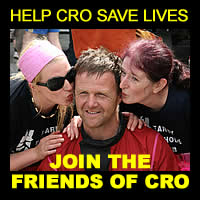 A new program launched by the Cave Rescue Organisation (CRO) gives folks an opportunity to join like-minded people and support the CRO, the mountain and cave rescue service for the Three Peaks area of North Yorkshire.

The “Friends of CRO” program kicked off with the first friends Zoe and Jon Ketteridge, who were eager to support the organization. In 2009 the CRO came to the rescue of Zoe after she slipped on ice and fell 100 metres (328 feet).

The High Sheriff of North Yorkshire, Alexandra Holford, attended the launch and presented certificates to Zoe and Jon, as well as to a group from a local school who had also been raising money.

Having been to Upper Wharfedale Fell Rescue, I have been impressed by the Cave Rescue Organisation which has been in existence for 77 years and is reputably the oldest cave rescue team in the world – and only one of three teams in the country who cover incidents above ground as well as below. Alexandra Holford, The High Sheriff of North Yorkshire

As a charity, the CRO is run entirely by volunteers and depends on public donations to keep it going.

For more information on becoming a friend of the CRO, check out their website at cro.org.uk/friends.