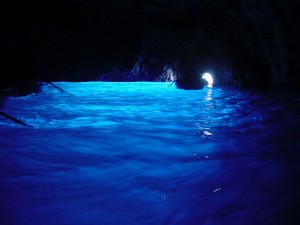 The mayor of the tiny island of Capri is taking a lot of flak over his plans to install floating pontoon board walks 45 meters (150 feet) from the entrance of Italy’s famous Blue Grotto (Grotta Azzurra) sea cave.

The problem is that Ciro Lembo, the mayor, wants to cover the structures with commercial logos as a means to generate revenue for the community.

Regional officials and environmental groups are completely against to the proposal.

According to Mr. Lembo, the cost of maintaining the island’s public spaces is more than five million euros (6.6 million USD), and there is only four million available.

Where am I going to get the missing million euros? With the state funding cuts, we need to make money somehow if we are to offer efficient services to tourists. Many people come to Capri to make commercials and exploit the island without paying a euro. Ciro Lembo, Mayor of Capri to the Telegraph