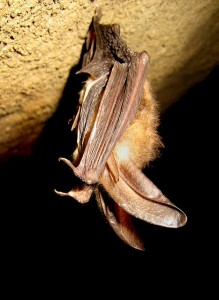 Recent research by scientists at the Universities of Bristol and Munich have given us a better understanding of how bat echolocation works.

The study, which involved placing objects in a bats flight path, has found that the intensity of an echo is not as important as its ‘sonar aperture’, the spread of the echo when it reaches the bats ear.

Researchers were first interested if bats were able to use echolocation in a crowded situation, or if the racket from all the echolocation calls would make them useless. To find out, the team placed a small object in the flight path of bats emerging from a cave and video taped the resulted.

The result was amazing, showing the bats clearly moving around the object, indicating that they were in fact able to use echolocation despite the pandemonium of calls in the crowded entrance.

“The videos clearly showed curves in the bats’ flight paths after we introduced the small novel object. This means that the bats were able to use echolocation in this familiar and crowded situation to detect the object, which measured only 5×8 cm, and to guide their evasive flight.” – Dr. Holger Goerlitz, a Research Fellow at Bristol’s School of Biological Sciences

Despite the size of the virtual object being more than ten times larger than the real objects used before, bats failed to take any evasive action, suggesting that bats do not solely use intensity while echo locating, and instead rely on another factor: the sonar aperture.

The minute difference between echos arriving at each ear give perception of the size of an object. A further study to test this using an array of speakers have confirmed the finding, and has proven that bats auditory system has evolved its own solution to perceive an objects size, comparable how us humans use our eyes. We use our eyes to judge objects by using the differences between both eyes to decide their size and distance.

How Bats ‘Hear’ Objects in Their Path [Science Daily]