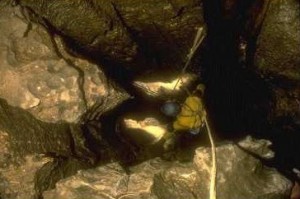 On November 6th, after more than 50 years, the final connection of England’s speculated “Three Counties System” was made, allowing a through trip starting in Cumbria to travel under Lancashire and emerge in Yorkshire.

The final 140 meter (460 feet) or so connection between Lost Johns and Notts 2 involved a troublesome and dangerous choke, that even now sounds quite precarious.

A word of warning though. This is a desperately horrible and dangerous choke. The route through has taken two years to complete and is around 140m long. I have personally been trapped in a collapse under a boulder the size of a piano and I have pulled someone else out of a similar situation. Two other diggers have suffered head injuries from falling rock. The worst stuff is scaffolded and much of the Notts side cemented up too. Due to the longer trip involved the Lost Johns side has less protection. Although there is only one route through there are several ‘dead ends’ that are unsafe. For example; if you follow the bang wire on the Lyle side you’ll end up in the 1980’s 90’s dig – not a good place. Further in, most of the scaffold was reclaimed from a dead end leaving it in a dangerous condition. All in all it is never wise to kick or thrash around in such a place and everyone needs to be very considerate as to what they push or pull on. It is also disgustingly filthy, has a couple of quite tight bits and is energetic especially with a bag. Sorry it’s not nicer but there was no choice.

If you are feint of heart or uncomfortable in dodgy chokes please do another trip. Anyone who does go down will be amazed at the tenacity and determination of the diggers – or perhaps just reflect on how crazy cavers are!! – Badlad on ukCaving.com

In addition to joining three counties, the achievement also makes this cave system the first in the UK to pass the 100 kilometre (62 mile) mark, coming in at approximately 102 kilometres (63 miles).

Update: Following some inaccurate reporting in the UK media the diggers have released the following press release which includes even more details of the monumental breakthrough.

At 4.30pm on Sunday 6th November 2011 two dedicated teams of cave explorers broke through the final gap after 140m of tunnelling between the Lost Johns and Notts Pot caves in the Yorkshire Dales region of the country. The breakthrough was the final piece in a jigsaw which makes reality of the much postulated “Three Counties Cave System”. It is now possible for the experienced (and very hard) caver to go underground in Cumbria, travel below Lancashire and emerge in Yorkshire.

This is the culmination of 50 years patient but persistent exploration of the huge network of caves that lie beneath the moorlands just to the north-east of the attractive town of Kirby Lonsdale. The combined total of the new cave system is estimated to be around 100km long and the longest in Great Britain.

The existence of the mega system was first proposed by Dave Brook of the University of Leeds Speleological Association in 1968. Since that time many different groups of cavers have striven to ‘join the dots’ between the known caves beneath Gragareth and Casterton fells. Gradually individual caves were explored and extended and with each passing decade new connections were made. Finally only one connection remained which has taken the last two years to pass. And this is not the end, as although the system fulfils the dream of connecting the cave through the three counties, there are many possibilities for extending the cave much further into Yorkshire.

“That last 140m has been one of the hardest to complete, burrowing through an horrendous fault zone of broken rock. This sort of digging is not for the feint hearted, commercial miners would have nightmares”, said local caver Tim Allen, “and we have certainly had a few close shaves. I was trapped under a collapsed boulder the size of a piano and only saved by a swift move with my crowbar. We named that spot the ‘Piano Bar’ after that incident. There have been a few minor injuries over the years, bashes to the face and crushed and blackened fingers, but we work as carefully as we can. Normally we have the lead diggers tunnelling at the face supported by others moving scaffolding up, and rock and mud out.”

“Come rain or shine we have spent our Thursday nights mining away into the small hours”, said Joe Giblin of the Preston Posse of cave diggers.

“Lying flat out in liquid mud with my hand outstretched I thought this is a similar, but a far less glamorous moment than the famous Channel Tunnel handshake,” said Pete Hall of the Red Rose Cave & Pothole Club.

“It’s been my job to make the route safe as the diggers progress”, said veteran caver Andy Walsh, “I can’t begin to tell you how much scaffold and cement I’ve carried down that cave, and the job isn’t finished yet”.

After three years of slow progress through the huge collapse zone, a voice connection was finally established on Thursday 3rd November, and the cavers knew they were close to success. Strong teams gathered on Sunday 6th November for the final push.

“First we heard voices, then we saw a light. After a few hours we managed to pass a crowbar through the small hole, and soon after that we shook hands with the team on the other side. Eventually we could pass through. It was a fantastic moment.” said Hugh St Lawrence.

“Finding the right direction has not been easy”, said Frank Pearson from Preston, “We have used laser survey techniques, magnetic field radio location, followed the draught and eventually heard each other. But in the end we were spot on.”