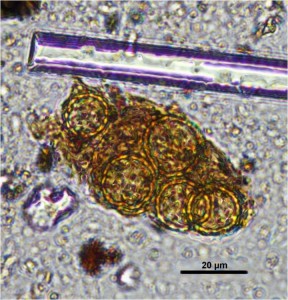 Fossilised pollen of Chenopodiaceae which appeared on the tomb. Photo via UPV/EHU

Fossilized pollen found on an ancient cave burial has been determined to have come from flowers placed deliberately say scientists.

In research, published in the Journal of Archaeological Science, scientists from UPV/EHU’s Prehistory Group together with University of Zaragoza lecturer Gloria Cuenca, studied the environmental conditions from when the burial inside Spain’s El Mirón cave took place and analysed the pollen and spores preserved in the sediment together with the microfauna remains recovered.

They found a high concentration of pollen of plants of the Chenopodiaceae family on the burial, however did not find them anywhere else in the cave. This suggests that they did not appear naturally in the area around the cavity and would have likely been collected somewhere else.

With their small, generally white or yellowish flowers we would not regard them as colourful plants today, although we cannot apply the Principle of Actualism to human conduct in these merely aesthetic matters. María-José Iriarte-Chiapusso

Having ruled out other possibilities for various reasons, like the fact that these plants may have been used for food or therapeutic purposes, the most plausible hypothesis is that complete flowers were placed on the tomb.