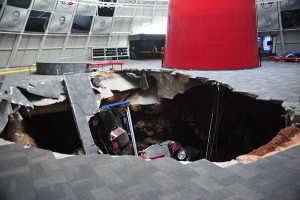 A new exhibit coming to the National Corvette Museum will let visitors experience the massive sinkhole that opened beneath it last year.

The museum in Bowling Green, Kentucky was alerted when the sinkhole opened under the floor in its Skydome area around 5:44am on February 12, 2014.

Now just over a year later with sinkhole filled in and the damage repaired, the Museum is working to recreate the fateful event that turned out to be a blessing in disguise. Visitors curious about the sinkhole helped the museum record its highest attendance ever in 2014, with about 250,000 visitors.

WBKO reports that the new exhibit, nicknamed the Thunderdome, is being constructed by a Florida company. It will include a model of the Skydome, along with a sinkhole that resembles the real destruction that took place.

It’ll be called sensorama. The guests will enter the room and it will simulate what it would have been like if you were in the cave when the sinkhole happened. So, it should be really exciting. Katie Frassanelli, National Corvette Museum Marketing/Communications Manager

The Thunderdome is expected to open this fall.