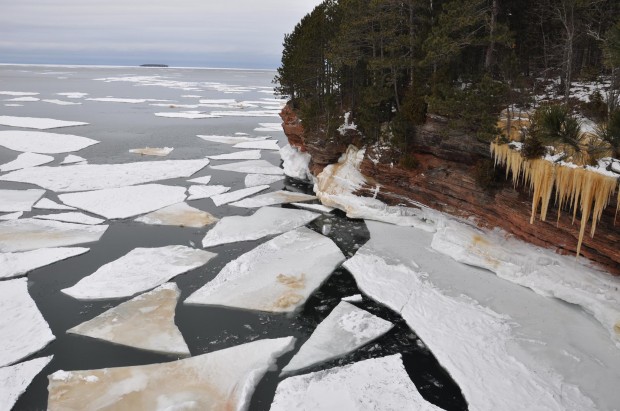 The broken up ice sheets at Apostle Islands National Lakeshore following strong winds over the weekend. Photo via NPS

Just as an early opening of the Ice Caves along Wisconsin’s Apostle Islands National Lakeshore appeared imminent, a strong east wind over the weekend blew away any chance of the caves opening in the near future.

Access to the ice caves depends on ice that meets a rigid list of conditions set out by the National Park Service to ensure the safety of visitors. Apostle Islands National Lakeshore staff monitor and check the ice and open the caves only when they deem the risk low. However, due to the unpredictability of lake ice, visiting the caves is never completely safe as conditions can rapidly change.

As recently as last Monday, rangers out inspecting the ice found it not quite safe enough to open the caves to the public. Now, thanks to the wind, the ice has all but disappeared.

In a Facebook post, Apostle Islands National Lakeshore reassured would-be visitors that “the ice frequently forms and breaks up several times before it locks in.” Unfortunately it also mentions that it will take “a return of colder than normal temperatures to increase ice cover on the lake.”

For up to date status of the ice, the National Park Service has set up and automated ice line (715-779-3398 x3) which will have the most current conditions.