New Room Discovered High in the Ceiling of Carlsbad Caverns 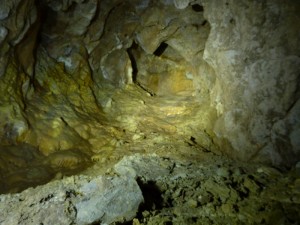 What began as a routine climb to a cave passage high inside the ceiling of the main cavern at Carlsbad Caverns National Park, turned into a night of excitement for two cavers who discovered a colorful new room on Halloween night.

Caver Derek Bristol, a volunteer with the Cave Research Foundation, and Shawn Thomas, a cave technician at Carlsbad Caverns, decided to climb to the “Spirit World” area to finish surveying as part of creating a new map of the cave. Once they were inside Spirit World, 77 meters (255 feet) above the floor of the Big Room, they traveled to an unclimbed ledge another 4.5 meters (15 feet above), which had been observed on previous trips but never explored. Such a ledge potentially can lead to new rooms and cavers have made many new discoveries in the Guadalupe Mountains simply by following such “leads.” Although neither Bristol nor Thomas expected this one to pan out – “Most of the time, obscure leads like this go nowhere,” Thomas said – they decided to explore anyway.

Going first, Bristol climbed up and over the ledge. To his surprise, it opened into a 9 meter 9 meter (30-foot) long passage.

I remember being really shocked. I couldn’t believe this was happening. There hasn’t been a room this big discovered in decades. Shawn Thomas

Thomas and Bristol, who named their find “Halloween Hall,” were amazed at the room’s beautiful colors and decoration. They found light-blue endellite clay, football-sized dogtooth spar crystal formations and, most surprising, thousands of bat bones. The room also was full of “breakdown” (fallen blocks of limestone bedrock) as well as a fabulous cascade of flowstone, a cave formation gradually created by mineral deposits left by water that once flowed slowly from above.

The most exciting part of the Halloween Hall discovery is that there may be much more to explore. Thomas and Bristol did not have time on Halloween night to go beyond the entry to the large room. They plan to return when their schedules allow, most likely in February, for more exploration, mapping and discovery.