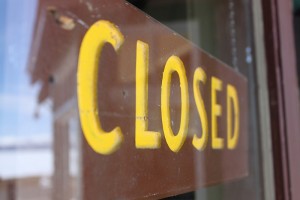 With the shutdown of the The United States federal government earlier today, “non-essential” services across the country have been suspended.

Prior to the shutdown Mammoth Cave’s Vickie Carson explained to Western Kentucky University Public Radio that everyone at the park, with the exception of security staff, would be furloughed.

We would close all park facilities like the visitor center and the offices and picnic area. We would initiate closure of park trails and roads, but some roads that are considered ‘through roads’ would remain open. Vickie Carson, Mammoth Cave National Park

A message on Carlsbad Caverns National Park phone line this morning does a good job of informing potential visitors.

Thank you for calling Carlsbad Caverns National Park. We are currently closed due to a lapse of appropriations in the federal budget. All events scheduled at this part will be cancelled for as long as the shutdown is in effect. If you are scheduled to attend a tour today, you have the option of a full refund or rebooking. Please check with the ticket sales office on you arrival in the park or call this number when the park reopens for more information on how to obtain a refund. We will reopen under normal winter hours as soon as a federal budget is approved.

Although slightly aggravating, likely more troublesome for cavers is that the shutdown makes it impossible to get permits to caves on public land administered by the Bureau of Land Management, the Forestry Service or practically any other federal entity. A notice on the U.S. Department of the Interior website also warns that existing permits may be canceled or postponed.

This could spell disaster for the upcoming Fort Stanton Cave Study Project expedition slated to begin on October 5th, which sits under land administered by the Bureau of Land Management.

Let’s hope this is resolved shortly.