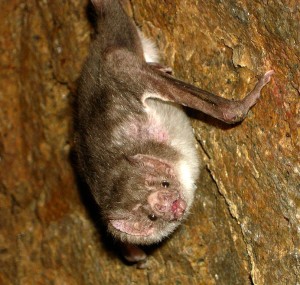 The common Vampire Bat, one of the residents of Trinidad’s Tamana Caves. Photo by Acatenazzi/Wikipedia

A team of American researchers were recently harassed while studying bats at the Tamana caves in eastern Trinidad.

Known for its population of eleven different bat species, the Tamana caves system is a favorite location for researchers.

Unfortunately during an expedition to the cave two weeks ago, a group researchers first had their vehicle broken into, before having a rock thrown at them, their gear stolen, and their anchor webbing cut.

The culprit is believed to be a man who first seen while the team was setting up camp on June 20th.

When they arrived back at their vehicle after visiting the cave that day, they found that their car had been broken into and ransacked, with many items, including headlamps, a phone, between $100-200 in cash and food, missing.

Believing it was a random theft, the team continued with their project.

The next day, after reporting the incident to local police, the team returned to the cave.

This time, determined to be more cautious, they parked their vehicle at a private residence. To further decrease the likelihood of problems, once they had hiked to the cave and set up their ropes, they also hid their backpacks and other equipment.

Despite their efforts to reduce potential problems, soon after descending into cave one of the researchers had a large rock land next to his head, and when they later tried to exit, they found their line cut.

When they finally made it out of the cave, they discovered all their hidden gear plundered and the fresh hole where the rock, that had almost hit their team member earlier, was pried from.

We later realised that someone had followed us and had been watching us Gerald G Carter, University of Maryland researcher and doctoral candidate

Now with losses and damage to the team’s equipment and vehicle in the range of $800.00, the group once again visited local authorities to report the incident.

Shaken and not wanting to return to the cave, the team switched the focus of their study to other bat caves in the Lopinot and Caura areas of Trinidad for the rest of their trip.

The incident has prompted the Trinidad and Tobago Incoming Tour Operators Association (TTITOA) to call for permanent protection for visitors to the caves.