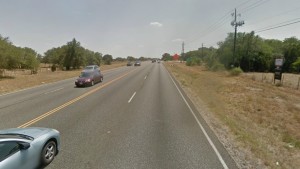 The section of RM 620 where the cave was found. Photo via Google Maps

A substantial cave, discovered last month along a road north of Austin, Texas, is causing problems for construction crews working on a road improvement project.

The cave was found along RM 620 on June 13th, when crews unearthed the entrance while clearing ground for storm pipes.

Although finding cavities is a common occurrence in the region, which sits upon the Edwards Aquifer, this cave is one of only a small percent that turn out to be significant.

Typically you get this kind of call and you find a little trench or cavity. About one percent of the time there is a cave you where you can’t see the whole thing and you have to make a map and go in and look around. This is more like the one-tenth of one percent where it is an actual cavern. Kemble White, SWCA Environmental Consultant

Filled with all sorts of formations, the beautifully decorated cave, divided into a number of chambers, is about 30 meters (100 feet) long and 18 meters (60 feet) wide, with 6 meter (20 foot) tall ceilings.

So far, initial surveys of the cave have not turned up any endangered species, so the main concern is to determine how to limit the impact of construction on the Edwards Aquifer.

We are coming up with some plans about what steps we need to take. The choices include filling the cave up, which we may be able to do. If not, we may need to build an at-grade bridge over the cave. The other choice is to buy additional right of way and reroute [the road]. We’re still evaluating all of those [choices] to see which one will be the right one. Lisa Birkman, Williamson County Commissioner

Engineers from Williamson County, the Texas Department of Transportation, the Texas Commission on Environmental Quality, and the construction project team will be working together in the coming weeks to find a solution on how to resume the project.

Update: Both Houston’s KHOU and Austin’s KTBC have posted video footage of the cave on their websites.