Newly Discovered Collapsed Cave Would Have Been World’s Largest 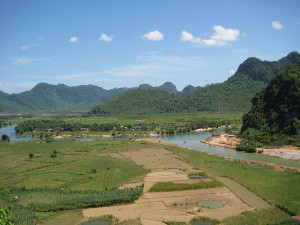 Scientists studying Hang Son Doong, currently the world’s largest cave, in Vietnam, have stumbled upon a collapsed cave that would have been even larger.

The joint US and British team were exploring the Phong Nha-Ke Bang National Park in the central province of Quang Binh recently, when they found the collapsed remains of a two kilometer (1.2 mile) long cave.

Initially it appeared that the new cave, which had seen heavy erosion from flooding, was once connected to both Hang Son Doong Cave and Hang En.

By taking samples of rock and stalactites, the US scientists were able to determine that the cave, said to be tens of millions of years old, collapsed sometime between 370,000 and two million years ago.

During the same expedition, the team also discovered ten vertical caves, the first of this type discovered in Phong Nha-Ke Bang National Park. Until now, all the caves in the area had been horizontal.

The new vertical caves, located in Xuong Valley in the western and eastern side of Chay River, measure between 95 and 356 meters (312 and 1168 feet) deep.