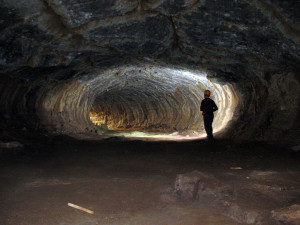 A dozen lava tubes, including one now considered to be the longest in Southeast Asia, have recently been discovered in Vietnam.

In late February, a group of cavers from Germany’s Speläoclub Berlin departed on an expedition to search for caves in two Vietnamese provinces; Dong Nai in the southeast and Quang Tri in the center.

During their first week in Dong Nai, in area known for lava tubes about 100 kilometers (60 miles) northeast of Saigon, the cavers explored 12 tubes totalling some 2 kilometres (1.2 miles) in length.

As suggested by its name Hang Doi and other caves in the area appear to be important bat roosts, as well as key habitat for a whole host of other critters including spiders, centipedes, scorpions, cave crickets, flies, ferrets and frogs.

Interestingly, some of these caves contained high concentrations of Carbon dioxide which required some caution.

The next destination in Quang Tri province didn’t workout as planned when the military denied their permit. Thankfully other officials suggested the tower and cone karst of Vietnam’s northern Ninh Binh province as a substitute.

During their two-week stay in the picturesque region, the team discovered a total of eight caves totalling almost 5 kilometres (3.10 miles) in length. The longest, Mat Rong, was surveyed to 1.23 kilometres (0.76 miles) long.

With only a tiny part of the karst in Ninh Binh investigated, and very helpful and enthusiastic local authorities that know of larger caves that still need surveying, a follow-up expedition is already being planned.