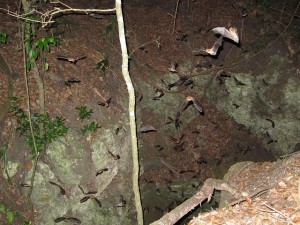 Concerned by white-nose syndrome confirmations in bordering states, Florida Fish and Wildlife are urging cavers and researchers to take precautions to prevent the disease.

With the discovery of WNS in Georgia earlier this month, the disease has been confirmed in all states adjacent to Florida.

Florida Fish and Wildlife biologists are still unsure whether Florida’s warm temperatures and short winters will slow the spread of Geomyces destructans, the cold loving fungus responsible for causing the devastating disease. They are certain however, that limiting the bats’ exposure to the fungus is an important method of prevention.

Anyone entering Florida caves are asked to follow the U.S. Fish and Wildlife Service decontamination protocols, and under no circumstances should equipment or clothing that has been used in caves in WNS-infected states enter a Florida cave.

Gray bats and southeastern myotis are particularly vulnerable during their maternity season, when they are giving birth and rearing young. To protect them during this critical time, cavers are asked to avoid known bat caves from April 15th through August 15th.