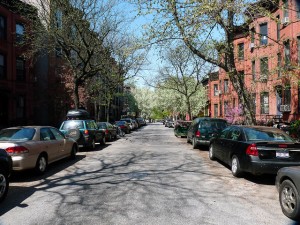 Cavers from New York City’s Met Grotto recently came to the rescue of a house cat who had been trapped for nearly a week between two buildings.

The 18-month-old cat, named Venusaur after a Pokémon character, was missing since he had failed to come home on February 7th during one of his usual adventures around Brooklyn’s Park Slope neighborhood.

It wasn’t until almost a week later, on February 13th, when a woman heard his cries and discovered him trapped in a 60 centimeter (two foot) wide crevice between two buildings.

The next day she contacted her former grotto who shortly sent two members, Kay Shriver and Rob Fabiano, to recover the kitty.

Equipped with rope, a cable ladder, and belaying devices, the cavers quickly rigged up to the fire escape. Ms. Shriver then descended the 5-6 meter (16-20 foot) deep pit where she met Venusaur, who was promptly put in a canvas bag and hauled out.

Once out of the crevice, the cavers used a phone number located on Venusaur’s collar to reunite him with his 9-year-old owner, Ryan Fanchiotti.

A visit to the vet has since given Venusaur a clean bill of health.

Cat Trapped? Call in the Spelunkers [The New York Times]