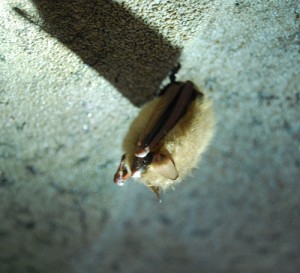 Bat in one of the caves at Carter Caves State Resort Park. Photo by tribbles1971/flickr

Kentucky’s Department of Parks has just announced that White-nose syndrome has now been confirmed in bats hibernating in caves at Carter Caves State Resort Park and Kingdom Come State Park.

Bats with WNS were recently discovered in three caves, Bat, Saltpetre and Laurel Cave, at Carter Caves State Resort. All three caves had been closed since 2008 in an effort to stop the spread of Geomyces destructans, the fungus that causes White-nose syndrome.

Of the 40,000 federally endangered Indiana bats that call the park home, the majority are found within Bat Cave, which is also part of the Bat Cave State Nature Preserve.

Kentucky State Parks has stated that public tours of the park’s Cascade and X-Cave will continue, as will protocols that require guests to disinfect their footwear and not to not wear clothing that has been worn in other caves, which begun in the fall of 2011.

At Letcher County’s Kingdom Come State Park a bat with the disease was discovered in January at Line Fork Cave during a cave survey. The cave is gated and not open to tourists.

Since the first documented case in Kentucky in April 2011, biologists have discovered 25 likely infected or confirmed WNS sites, spanning the state from Trigg County in the west to as far east as Carter and Letcher counties.