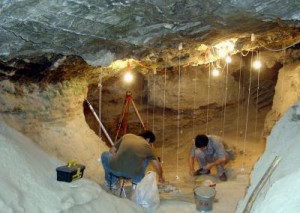 Researchers carrying out excavation works at the Tianyuan Cave. Photo via Institute of Vertebrate Paleontology and Paleoanthropology, Beijing

Analysis of DNA from a bone unearthed in a cave near Beijing, China has discovered a common origin with the ancestors of many present-day Asians and Native Americans.

An international team of researchers extracted nuclear and mitochondrial DNA from the 40,000 year old leg bone found in 2003 at the Tianyuan Cave site located outside Beijing.

Using new techniques that can identify ancient genetic material from an archaeological find, the scientists were able to reconstruct a genetic profile of the leg’s owner.

This individual lived during an important evolutionary transition when early modern humans, who shared certain features with earlier forms such as Neanderthals, were replacing Neanderthals and Denisovans, who later became extinct. Svante Pääbo, Researcher at the the Max Planck Institute for Evolutionary Anthropology and leader of the study

Furthermore, researchers found that the person did not have any more Neanderthal or Denisovan DNA than present-day people in the region, suggesting that modern humans haven’t changed much in the past 40,000 years.

More analyses of additional early modern humans across Eurasia will further refine our understanding of when and how modern humans spread across Europe and Asia Svante Pääbo, Researcher at the the Max Planck Institute for Evolutionary Anthropology and leader of the study

The study was published recently in PNAS.