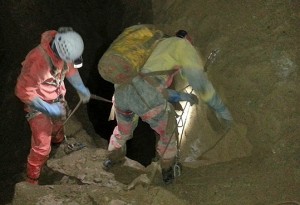 A 30-year-old Swiss woman died on Sunday, December 30th, 2012 after she fell about 40 meters (130 feet) during a caving trip in Switzerland’s Siebenhengste-Hohgant cave system.

The woman, an experienced caver, was on a three-day trip exploring the very extensive, highly demanding cave with a partner. The two were on their way back to their camp after exploring area of vertical shafts at a depth of about 300 meters (985 feet) when the incident occurred.

After she fell, her companion, a 37-year-old male, spent several hours trying to reach her, but once he finally did, was unable to find any signs of life. He eventually made his way out of the cave and contacted authorities.

A effort by Spéléo-Secours Suisse to recover her body began on New Years and has involved about 50 experienced cave rescuers from all over the country.

Given the difficult to reach location of the incident – about five hours from the nearest entrance with many restrictions in between that need to be enlarged – the effort is expected to continue until at least this evening.

Update: The body was extracted from the cave around 8:20pm (local time) on Wednesday evening.