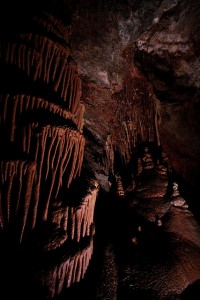 Inside Lewis and Clark Caverns. Photo by Nomadic Lass/flickr

Lewis and Clark Caverns, the main attraction of a state park of the same name, have been open for tourists off and on for more than a century. During the years lint from thousands of visitors has accumulated inside the cave.

Comprised of clothing fibers, hair, dead skin cells, dust, and other foreign objects, the build up of lint negatively impact the cave environment by interfering with formation growth, and adding an artificial food source for cave life.

It was so satisfying to me to look up from my own meticulous work and see the headlamps of our troop scattered about this amazing place, all intent on their chosen area, Ann Brooks, Girl Scout Troop 3964 Leader