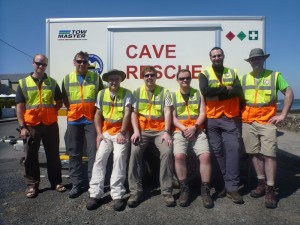 This weekend the Irish Cave Rescue Organisation (ICRO), the national body which coordinates and manages cave rescue operations in Ireland, will be holding their annual symposium.

Held October 27th and 28th in county Leitrim, the event will allow the group to review a very busy year.

Despite a lack of any serious incidents, the group held six major rescue practices, a number of desk-top practices, as well as first aid training and other courses.

Additionally, the ICRO were once again involved in providing first aid and medical assistance at two major public events this year, proving that their subterranean rescue skills are equally as useful above ground.

Shunning the dark depths of the caves of county Clare, ICRO members decided to absorb some sunny rays on a beautiful day at the Burren Marathon last May. Experienced ICRO first aiders were placed along the route through northern county Clare to ensure that participants were well looked after – that their thirst was quenched, their skin was sun-proofed, their blisters soothed and any injuries were treated. The ICRO has been assisting the Ballyvaughan Fanore Walking Club, which organizes the annual event, for a number of years and considers it a very important event in its annual calendar. 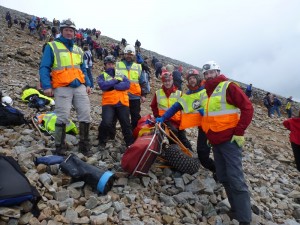 Then in July, ICRO members ascended one of the most popular mountains in the country, again to offer first aid and medical assistance on one of the busiest days in the year – Croagh Patrick in county Mayo on Reek Sunday.

The ICRO is funded by the Irish Coast Guard in the Republic of Ireland and Sports Northern Ireland in the north and works in cooperation with An Garda Siochana and the Police Service of Northern Ireland (PSNI).