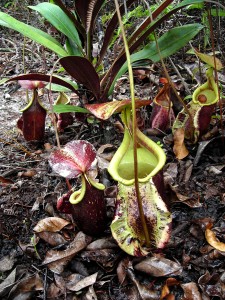 Scientists studying bats in Borneo have discovered that the bats and a carnivorous plant have an unusual mutually beneficial relationship.

The Hardwicke’s woolly bats were observed resting and sleeping in the aerial pitchers of the carnivorous plant Nepenthes rafflesiana of the elongata variety.

While roosting in the plant, the bats would relieve themselves in the plant’s prey-trapping pitchers. Surprised by the observations the biologists analyzed the plants and discovered that some 33.8 percent of their nutrients came from the bat poop and urine.

Looking further at the plants, the researchers discovered that little energy is put into luring insects, the usual way these plants feed, and instead energy is spent on growing the ideal bat roosting habitat.

It is suspected that the relationship evolved from coincidental use into the regular use that is being seen today after the plants began making themselves more attractive to bats.