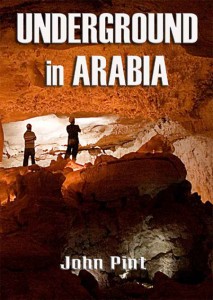 A recently released book by caver John Pint, follows his twenty-five-year of explorations in the deep dark passages under Saudi Arabia.

Titled Underground in Arabia, the story begins in 1983 with the discovery of an unassuming hole in the middle of the desert and continues on to recount the discovery and exploration of many other caves and lava tubes.

The 174 page book which has over 30 illustrations is now available, in either paperback or e-book format, over at Amazon.com